In 1987 the population of the Township of Langley was around 54,000 (1986 census: 53,434). Today, that number is around 128,000 (bcstats.gov.bc.ca). Surely the majority of that 240% growth since 1987 has been the result of development in the North Langley communities of Walnut Grove and Willoughby, but there is no question that Langley has been an attractive place for people to call home.

1987 was also the year that Fort Langley last adopted the Fort Langley Community Plan Bylaw (No. 2527). Since there there actually hasn’t been a whole lot of amendments but there have been some pretty significant ones. In 1997, the “Heritage Conservation Area” was added, In 2006, the Bedford Landing development was approved at the old Interfor mill site, in 2013, McBride Station added some additional density to the village core and finally, there was Coulter Berry. But Coulter Berry was just one building. I won’t get into the technical differences between Coulter Berry and Reid Block or Lily Terrace, among others, since that’s not the point here.

The point is that Fort Langley has changed and is changing. While Fort Langley has been the subject of immense controversy over the past… 200 years… it is the last 5 years or so that is of serious interest to this author. During this time, one man, Eric Woodward and his company, Statewood Properties, has been at the focal point of Fort Langley’s controversies. I don’t have his full history with Fort Langley, although I’m sure I’ll be inundated with facts upon publishing this, but what’s important is that he owns a significant portion of commercial lots in Fort Langley, most of which, I believe, are in the “Heritage Conservation Area”.

The Heritage Conservation Area was an amendment added to the community plan in 1997, which, among other items, requests that buildings in this area adhere to these guidelines:

a) historic buildings should be renovated and restored in a manner appropriate to their individual period and style and, whenever possible, original forms, materials and details should be uncovered or left in place and preserved;
b) new construction and infill projects should be designed to blend harmoniously with historic elements of the streetscape; and
c) decorative styles which are out of place with the architectural evolution of Fort Langley should be avoided.

However, and to the chagrin of those who have opposed recent development in the commercial core, the plan goes on to say: 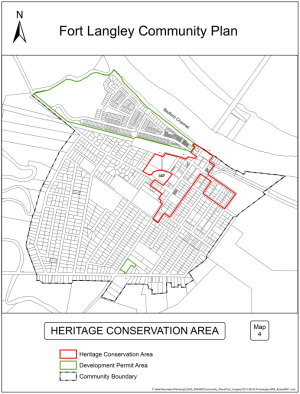 The problem is less that the guidelines are non-binding than the problematic definition of what qualifies as “historic buildings”. As the Eric Woodward Foundation has recently proposed demolition for several derelict buildings, this definition has been at the forefront of opposition to this proposal. HeritageBC aptly, but purposely vague, provides the following explanation:

“The term ‘heritage conservation’ was coined in Canada to describe the movement that advocated an alternative to the thoughtless development and urban renewal that was destroying irreplaceable vintage buildings. In this sense, heritage is clearly understood to mean something worth keeping, preserving, and protecting…

…Heritage is, simply, what we agree is worth keeping.”

The purpose of keeping this definition vague is so that the local community to be able to have that discussion about what is “worth keeping.” As you can imagine in a community as old, yet dynamic, as Fort Langley, this is bound to lead to major clashes. From a lawsuit to a “heritage hole“,  to an alleged death threat to a pink house, the clash has become publicly apparent and tangible in the little village of approximately 3,400. However, Fort Langley is much more than just the village. It is the cultural centre of the greater Langley area and of great importance to the municipality as a whole and the history of the province. Unfortunately, the debate about what is “worth keeping” and what is appropriate for the conservation area has led to many in the community treat these buildings with more respect and care than they do with other people.

I don’t believe that any community plan could have anticipated one person to come in and buy up a majority of the commercial core. I’m not totally sure it would have really mattered, but it has. As this property owner plans to transfer the properties to a foundation, whose board has already started to make the decisions regarding the buildings, the time may be ripe for an updated plan to get started now. In my opinion, a 32-year-old plan for a community with as much activity and looming redevelopment as Fort Langley is, frankly, irresponsible. The 1987 plan does not meet the needs of the current generation, nor reflect the influence of its accumulative amendments or the issues confronting us today.

It is time for the people of Fort Langley to have a comprehensive review of what the village of Fort Langley should look like over the next 40-50 years instead of one singular issue at a time – especially if some developers get a “pass” and other don’t. Several developers and property owners have been busy developing other buildings that some might not consider meeting the style and character of Fort Langley, and even the Township of Langley is getting its feet wet with development in the village (see Township site and news report). This is a lot of development activity that each, in its own way, ignores the archaic plan.

Updating the Fort Langley plan obviously shouldn’t be limited to the commercial core. With 1/4 acre “tear down” lots going for over $1 million and the typical new home over $2 million (link for real estate site), Fort Langley is fast becomes the playground of the wealthy. Purchasing a condo is limited primarily to Bedford Landing, and those certainly have a pricey premium compared to the rest of the Township. Without any community plan to increase supply in a proper way, Fort Langley is susceptible to a concentration of more luxury homes on 1/4 lots or to the occasional risk-taking developer that will plow through the guidelines to haphazardly build more luxury condos.

A community plan for a new generation needs to address some serious issues that are lacking in the 32-year-old plan:

There are obviously two visions of Fort Langley: one of progress/revitalization and one of conservation/heritage. I do not believe either are “wrong” nor guilty of “destroying Fort Langley”. These paradigms do not have to be perpetually locked in a zero-sum game, arising to toxic levels at every new opportunity. Heritage and progress are only mutually exclusive where there are attitudes built on a complete lack of compromise.

An updated plan may not solve the emotional investment or heated debates. It will not overcome hatred or greed, lost nostalgia or sub-optimal profits. However, I do believe a new plan that respectfully engages the whole community could lead Fort Langley into a future that balances its true history (including that of First Nations) with progress without such extreme ambiguity. A Fort Langley plan for 2020 could learn from past 200 years to provide guidance for building onto the success of the livable neighbourhood for generations to come.